When I was asked to paint something as a retirement gift for COSEWIC's Ron Brooks, the choice of subject matter was obvious. Ron is herpetologist, and an expert on the Snapping Turtle. I started this project in May, soon after the spring COSEWIC meeting.  I looked at thousands of photos of snapping turtle and as many video clips of snapping turtles as I could find.

The biggest challenge was the placement of the waterlily leaves, the original sketch for the painting had the surface of the water nearly covered in leaves but as I worked on the painting I decided that I didn't want to do that, since it would reduce the light hitting the turtle and obscure the gradation in the water between the greens of the depths and the blues of the shallows.

To work out the placement I photographed the painting and then colour printed multiple copies of the image to do trial placements of the water lily leaves.  I've never used this technique before, but loved the ability to play with options before committing to them on the final painting.

Ron's contributions to COSEWIC have been very large and he's going to be missed a lot on the committee.  I hope Ron and Pauline enjoy this painting in their new home in Nova Scotia. 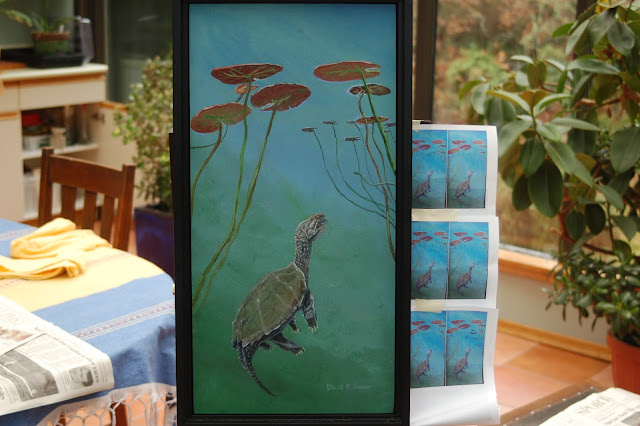